The vast majority of scientists and researchers agree that manmade emissions are likely exacerbating climate change; since 2007 no scientific body has disagreed with this position.   However, it is clear from the wake of August 2015’s Clean Power Plan that Americans remain divided on whether anthropogenic climate change exists. As this makes many forms of climate change legislation nearly impossible to achieve a bipartisan consensus, this begs further study into how and why respondents answer, “Is global warming happening?”

Figure 1 shows America’s response to Stanford University, Yale University/ George Mason, the Pew Research Center, the University of Michigan (previously Brookings), and Gallup polls asking basically the same question: “Is global warming happening?”  While the differences between polls likely occur due to question wording, one stark realization stands out.  Since 2006, a majority (50-85%) of Americans have agreed that global warming is happening, but there is also variance among those numbers.  This variance is likely sufficient to influence policymakers actions, particularly when broken out on a state, regional, or congressional district level. 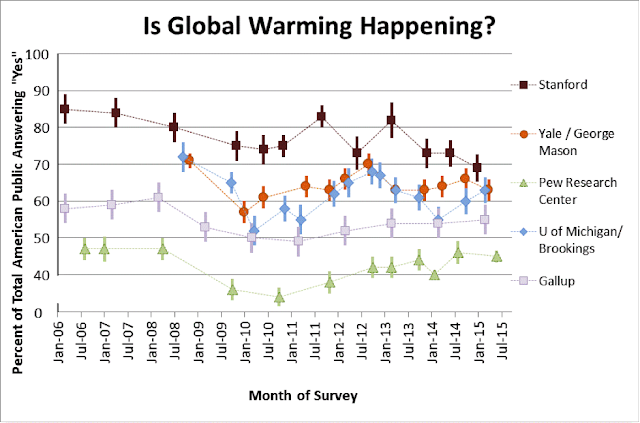 Figure 1: Percent of total American public answering “Yes” to the question “Is global warming happening?” Since the questions vary, where possible, we interpret as: “Temperatures have been increasing; this is at least partially caused by man”. The vertical bars give the polling error indicated by the survey authors.  Select sources: Yale, U Michigan/ Brookings, Stanford, Gallup, and Pew.

Acknowledgements:  This entry has been updated by previous works from the author, including a Scott Institute/ Energy Collective Blog, an AGU blog, and an upcoming book chapter.

About the Scott Institute for Energy Innovation

The Wilton E. Scott Institute for Energy Innovation is a university-wide research initiative at Carnegie Mellon University focused on improving energy efficiency and developing new, clean, affordable and sustainable energy sources. More information on the Scott Institute is at www.cmu.edu/energy.